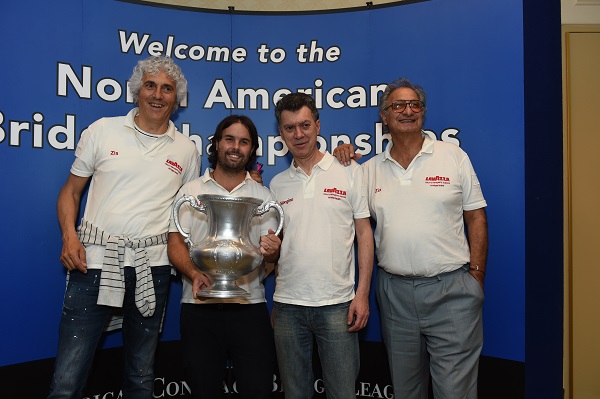 The hand: The Lonely Sparrow – Final match Lavazza vs Diamond. Board 27, second segment of four. Love all.

The verse “Il Passero Solitario” (The Lonely Sparrow) is within the finest of Giacomo Leopardi (Recanati 1798 – Napoli 1837). From the top of an ancient tower, a sparrow is adding his song to the beauty of the spring, and “…The harmony is running throughout this dale.”

Sometimes an hand looks trivial, but suddenly a trill arises and unveils the harmony.

The Bocchi’s 6-4 two suiter major is more than enough to open in any position, not only in third, but it needs to be ready to undervalue it if the partner doesn’t give the suitable responses. After the 1♠ response by Madala, it becomes very enticing a jump to game or at least an inviting 3♠, but it wouldn’t be any harmonic. The matter is simple: to get game, North needs that South has at least good 9-10 points by heads; if South actually had such values, he shouldn’t pass, therefore needn’t neither jumps nor invites. Madala’s 2NT response has a well outlined shape: he’s balanced and has at least a little hearth support, hardly less than Qx.

Hampson led ♣K; Greco took and switched to diamond, cashing ace and king, then played spade; Bocchi took and cleared trumps, then played hearts by heads, and not even he needed to trump the third hearth. Well sung, Norberto and Agustin. 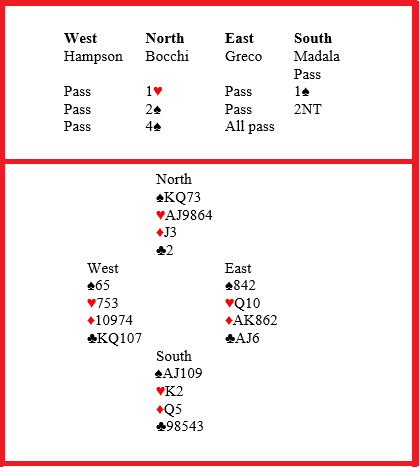 In the other room the auction was different. Diamond, in south, opened 1♦ (conventional), Platnick responded 1♥ and Zia entered the auction with 1NT, hindering opponents, who never found the spade fit and ended in 4♥. It was a worse contract because it now needs the trump finesse. Zia led diamonds and cashed even the club ace, then played spades. Platnick started hearths by knave; Zia must cover: because his 1NT he couldn’t longer hide his points, then, at least, hides his ten (Zia always does hide something to opponents). Now Platnick tried the finesse to ten, failing.