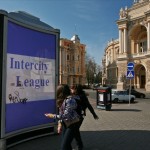 Once the idea was born to organise a teams league for juniors, little did I know what I was up to! Thanks to lots of support – each one in his own way – from Decho Deneff, Ine Gielkens, Jérôme Rombaut, Valerie Westheimer, Paula Mittelman, Slawek Latala, Deyan Spasov, WBF, Tonci Radelja, Paolo Garrisi, Stanko Kruzic and last but not least my husband (and with my sincere apologies to all the other ones that I forgot to mention) things started to roll. It took a lot of writing texts, replying emails, answering questions on BBO, but the Junior Inter City League (JICL) did started its first edition on the 6th of January with 40 registered teams.

Among those teams are players who recently in Philadelphia successfully competed for the Rona cup (young ladies gold and silver winners) as well as the Damiani cup (gold, silver and bronze for youngsters).
You can find those players among the teams Warsaw Girls, Waszawa, Puszczykowo, London, Paris, Notthingham and Groenekan. (I hope I haven’t forgotten anyone?)

The WBF were keen to support the juniors by bringing in a strong TD with experience in international juniors events…….. and by appointing Rahmi Iyilikci they certainly did so!
Rahmi has an impressive international TD career:

The first round of the JICl showed some teams managed to hit the ground running, and pocketed the maximum 25 VPs. Interestingly, amongst the highest scoring teams are the two teams with JICL’s youngest players (12 years old). Well done team Niksic and team Cagliari! There were also some teams who were left empty handed (0 VP) after their first JICL encounter.

Following the second round and with two delayed matches between four teams still to be played, Port Royal is leading the pack with a repeated victory of 25 VPs. Well done!

As there are 7 more round to go in the round robins, a lot can (and will) change.
If you want to know more about the JICL, have a look at:  http://jicl.splitbridge.hr/

PS. I would like to have a list with BBO subs (singles, pairs and teams, who can play in case we need substitutes).
If you are a junior under 28 and are interested to play occasionally at the JICL – please contact me or leave me a message at BBO (where I am Jantien). But please avoid Thusday.