Ireland won the 2015’s Camrose before Wales and England. After the first week-end it was Wales which led, but Ireland was right there, only 0,4 IMPs trailing. England, instead, looked by then too far, -13. In the second week almost all changed: England changed its pace and won, Ireland was second and Wales third, but the overall result gave the victory to Ireland.

The second week-end took place in Northern Ireland at the La Mon Hotel & Country Club, Castlereagh, Belfast. It is next to the north-west shore of the beautiful Strangford Lough.

The hand: The Formidable People of Aedan mac Gabrain – According to the Oxford scholar Sir Frank Stenton, author of Anglo-Saxon England (1971), early in the fifth century of the Christian era a small Gaelic kingdom was established in Argyll, central Scotland, by settlers from Ireland who recognized the lordship of the Ulster’s king. Under Aedan mac Gabrain, who became their king in 574, they harried the Forth and the Orkneys, and poured into the English Northumbrian territories. Against them had to move the Bernicia’s king Æthelfrith himself with a powerful army; eventually Aedan mac Gabrain was defeated at Degsastan in 603 (maybe in Liddesdale), but that formidable people will never be forgotten. Not even at the bridge table.

Match Ireland-England. All vulnerable, dealer South. In closed room it was reached the 3NT contract, +3 by North. In open room the Irish, presumably Aedan’s descendants, bid and played accordingly. 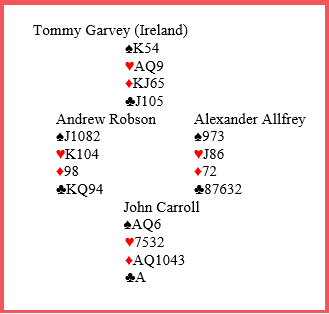 North-South played strong club, then Carroll’s reverse is worth no more than 16 HCPs. 2♦ is inverted and forcing. The sequence 2♠… 3♦ by Garvey is a slam invite which Carroll promptly adhere to with his 4♦, flying over the 3NT bar (here both the players are bidding bravely, in sheer mac Gabrain’s style).

Robson led ♠J; Carroll took, dropped trumps, eliminated clubs and spades, and eventually played the hearth finesse towards AQ9, ready to overcome, by the minimum needing, anything from West. Robson ducked; the Declarer played the 9, and Allfrey, on lead, cannot do anything but to return hearth for automatic finesse or clubs for sluff and ruff, thus conceding the twelfth trick.