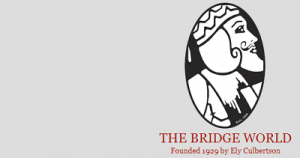 The Bridge World magazine has announced that Fred Gitelman has joined the editorial staff. Gitelman, well-known to enthusiasts around the globe as one of the pioneers of online bridge play and the broadcasting of major events over the Internet, is also one of the world’s leading experts.

He has represented his country in the most important events. One of the hallmarks of a top player is the ability to play out of the rough, putting forth best effort despite adverse circumstances.

On this deal from a trial to select the members of an international team, Gitelman faced a difficult challenge after his side was preempted into a dangerous contract: 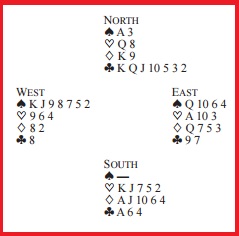 The North-South bidding was sensible. North overcalled what he hoped he could make, if necessary by holding up the ace of spades to shut out the West hand during the play. Gitelman, South, offered a choice of red-suit slams, justified by the overwhelming likelihood that North-South had at least an eightcard fit in one of those suits. West led the eight of clubs, an obvious singleton, and the dummy was a disappointment to South. Declarer took the first trick in the North hand and continued with the king and nine of diamonds, reaching the critical point in the play. If East had begun with three diamonds to the queen, it would have been necessary to finesse and soon to cash the ace of diamonds.

Gitelman recognized that the bidding made it more likely that East had begun with four diamonds to the queen, so he let the nine of diamonds hold, discarded the ace of clubs on the ace of spades, then led winning clubs from dummy. East was helpless. If he did not ruff a club, South would discard all his hearts. After East ruffed, declarer overruffed, drew the last trump, and lost only to the ace of hearts.

Gitelman’s joins The Bridge World’s editorial staff with the May issue. For more information, visit: www.bridgeworld.com