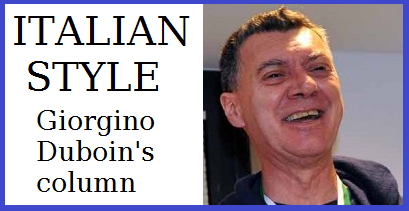 The pandemic has inevitably obstructed all national and international bridge activities. Tournaments and championships have been cancelled and with the exception of a few online competitions – the value they may have – we have not been able to touch the cards for six months.

We have been hearing a lot about ‘restarting’, although the driver for this seems to be mainly financial sustainability, not backed up by an improvement in the infection spread. The Italian Bridge Federation  (FIGB) has thus decided to bring players back to the table with a bang: the finals of the national club championships, which were interrupted by the pandemic restrictions last February. It is a great celebration for our game, broadcast on BBO so everyone can follow from the comfort of their homes.

The open finals took place on 19th and 20th September in Milan, following the strictest Covid precautions. At the same time, they played the match for third place. It was a nice celebration of our sport’s comeback.

But…what about the ladies’ championships? Don’t you think this was the best opportunity to play the ladies’ finals too?

No, the Federation decided to hold this event in Salsomaggiore Terme on 26th and 27th of September. But what about celebrating the restart? We could do something to celebrate in Salsomaggiore, but this will not happen: the final will not be played and the medal will be assigned by default. Why? Because one of the two contestants, Idea Bridge, cannot field a team on those dates, which is something they have flagged several times over the last six weeks.

I will not bore you with all the attempts they made to move the match, considering that Idea Bridge ( the other contenstant) was able to make any other date. I would however like to point out that when the final was suspended in February, it was postponed. Since this match does involve any other teams, any date and place would have been suitable as long as both participants could make it. You’d obviously think that one would check the teams’ availability before committing to a date. But the Federation invited the teams only after choosing the date. When Idea Bridge said they could not make it, the Federation asked the teams to find an alternative weekend, but the other team (Reggio Emilia) kept changing their mind and so we landed in the present situation.

If the first celebration of bridge post-Covid is a win by default, I will be pessimistic about the future. We should wait for better times, without taking rushed decisions that could speed up our extinction: trying to do something quickly and badly can only lead to terrible outcomes such as this.