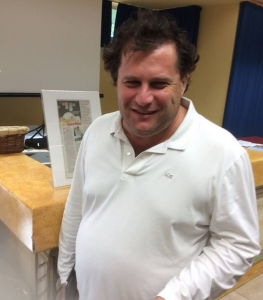 Some bridge players were disappointed.

In March 2016, the Italian Federation suspended Fantoni and Nunes for three years, after finding them guilty of a sport offence. The notification was made on 8th April 2016. The term of suspension will end on 9th April 2019. Fantoni and Nunes  filed an appeal to TAR (Regional Administration Tribunal) in Rome against the Italian Bridge Federation (FIGB). The hearing before TAR will be held on December 18, 2018 in Rome. Therefore, the Italian Italian judicial proceedings is still pending.

Gonzalo Goded, a Spanish top player and publisher of BridgeGod.com, issued the followings:

“I hereby declare that me: Gonzalo Goded, and my webpage: www.bridgegod.com will stop inmediatelly all kind of collaboration with the Asociacion Catalana de Bridge (www.bridge.cat) which have included in the past promotion of their annual tournament and writing articles for their magazine among others.

My decision stays firm for as long as Miquel Trapé continues to be in charge of the association.” 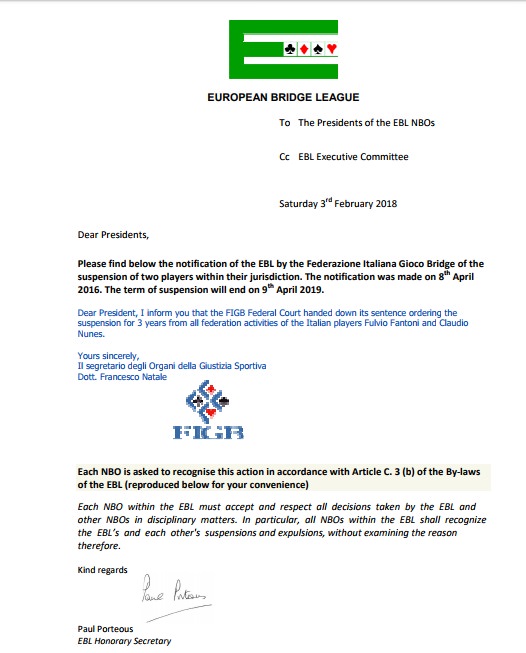 I appreciate your communication. Having consulted our legal services and without wanting to enter into controversies that absolutely do not correspond to me I to evaluate, I provide you with the following information that has been put at my disposal and that I understand correct – unless otherwise indicated to me – regarding the facts and the interpretation of the rules that apply to the cause that concerns us
1.- The decision of the CAS, to which I have had access and which is totally executive, obliges the EBL as if it were a decision of its own.
2.- Precisely because of the principle of reciprocity that is alluded by you , the NBOs must abide by the decision of the EBL which in turn voluntarily submitted to the CAS decision. It suffices to read what the article that you mention itself indicates of the by laws of this respected organization and the article 17 of the WBF that I reproduce for greater comfort

a) The NBOs as members of the EBL must recognize each other reciprocally as Organisations exclusively controlling bridge in their respective countries.

b) Each NBO within the EBL must accept and respect all decisions taken by the EBL and other NBOs in disciplinary matters. In particular, all NBOs within the EBL shall recognize the EBL’s and each other’s suspensions and expulsions, without examining the reason therefore.

c) NBOs shall report their suspensions and expulsions in a timely manner to the EBL which will publish the information to all other NBOs.

d) Each NBO as a member of the EBL must accept that reprehensible conduct (as defined in the Code of Discipline) at an EBL event is to be processed solely by the EBL unless expressly agreed otherwise by the EBL.

All sanctions must be reported to the WBF in a timely manner by the member and/or Zonal Conference imposing the same.

The WBF may, at its discretion, decide to apply a sanction rendered by a member or a Zonal Conference to the events under its jurisdiction and/or grant worldwide effect to it. (…)

3.- In view of the aforementioned regulations and in the hypothesis of a conflict between a decision (CAS) of the EBL and that of an NBO, it is evident, as is internationally recognized in any field, that the principles of normative and the principle of direct dependence apply and must prevail Moreover, as pointed out by our legal services and considering the arguments that will follow later it should be the EBL that sees that the decision (CAS award) is imposed without restrictions in all NBO’s.
4.- Having also consulted the AEB , it has been indicated to me, and as to the best of everyone’s knowledge, that before the start of the tournament in Barcelona no recommendation was received at the moment as of section c) of the aforementioned article , which has been copied, is determined.
5.- In any case, the ACB, and I indicate that exclusively for clarification purposes, is not an NBO assigned to the EBL and that does have that quality since this quality is held by the AEB. I reproduce what its Statutes indicate in this regard for greater comfort:
Article 3.- The Spanish Bridge Association, Sport Promotion Entity is linked and holds the exclusive representation of Spain before the European World Federations (WBF) (EBL) and the European Union (UEBL), of Puente, as well as in how many activities and Official international competitions are held outside and within Spanish territory, which are related to the Bridge
.6 Mr. Fantoni is a member of this association, with prior character and counts the corresponding license (nº 0822562)

7.- Having contacted with Mr. Fantoni, after having received your mail, he indicates me and as I have been able to verify: the following:

a) That the sanction of the FIGB is exactly for the same facts on the same and specific event (championship organized by the EBL in Croatia in 2014) without variation or any differential element, so, and as I am informed the maximum authority corresponds to that organization, hence the EBL,the sanction for these acts has been revoked by the EBL, which is what the CAS award means, and at the time it is in force, with alleged effects even outside the scope of the FIGB, for other NBO’s, , and the CAB award and the revocation has to be followed by all NBO Apparently and as it is referred to me and within the same organization of Bridge that is pyramidal (WBF, EBL, NBO’s) the same resolution cannot exist and not exist at the same time

b) .- Mr. Fantoni tells me that before signing up for this tournament, he went to the Chair of the FIGB, indicating, apart from other considerations, that in view of the provisions of the applicable regulations he was going to enroll in the Barcelona tournament organized exclusively by the ACB and not by the AEB, so it is not an official tournament and turns out to be an invitation. I reproduce the article in question to which I have had access and which has also been analyzed by our legal services.

Ultimately and in view of all the above the Association that I preside has not had, nor has any argument to reject the registration of Mr. Fantoni for the tournament (at risk of incurring an arbitrary decision likely to be reported to the courts with serious legal end economic consequences) .

I am also told that the FIGB has published on its website on January 12 the CAS award that must also be fulfilled in Italy.
I hope that the explanations provided are sufficient and any misunderstanding has been cleared, regretting any inconvenience that we have been able to produce before a decision that is fully supported by our legal services. As it cannot be otherwise,

I remain entirely at your disposal waiting to be able to greet you personally next time.

“I received the official position from WBF confirming the EBL one.

The suspension by FIGB is in effect (TAR rejected the request made by Fantoni/Nunes to suspend the FIGB decision and the entire matter will be discussed at the hearing of next 18 December).

Those who breach the above rule is automatically prosecuted and is liable to sanction up to the life-banning.”.

After my comments about Miguel Trape, President of the ACB, posted on the internet (Facebook and Bridge Winners) the past days with the occasion of the Barcelona tournament in which Mr Trapé played with Mr. Fantoni, I have seen the necessity to reflect about the origin of my statements on the light of information that I have received.

1.- Although it has not been my intention and I do not assume it in disciplinary terms, it is evident that without any reason I have questioned the integrity of someone with an irreproachable trajectory.

2 .- Although I might not approve of the fact that Mr Trapé played with Mr Fantoni it does not give me legitimization to question his integrity.

3.- I know that Mr Trape is fully convinced that the resolution of the CAS is adjusted to the law and that he is also convinced that if the sanction of the EBL had been ratified, the sanction would have ,obviously, had to be complied In the same way, a revocation of the same resolution must be fulfilled in its terms and that he is not anyone to question the innocence of anyone. Specially when all parts involved admitted to submit to a procedure that ended with an revocation of the initial ruling and has determined that no sanction should be applied.

4.- I have been able to analyse the reports on the situation with the FIGB and the correspondence and cross-information between the ACB and the EBL .It seems evident that due to the principle of reciprocity the EBL’s obligation , being the higher legal entity, prevails over the FIGB and the FIGB has to respect and comply with the decision of the CAS .

5.- Perhaps the apologies that I request here publicly and voluntarily should make us reflect on the opinions that we sometimes hastily issue without having all the information and background , carrying out a parallel judgement to the system that we have abided to follow. If it is necessary to change it, it should be done respecting the system we have and what is more important respecting that others may think and act differently.