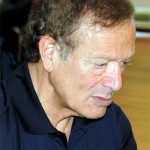 It was a bad week for Italian sponsor Francesco Angelini. First his team was kicked out the 2012 Italian Club Team Championships and a few days later CONI, the Italian Olympic Committee, overruled an appeal by Mr. Angelini regarding the same event in 2010. Therefore we asked for a reaction by Mr. Angelini. The shock being out of above mentioned championhips in an early stage is explained by Mr. Angelini: “Our team finished only third* because we were forced to play with only 2 first-string players on 6. In fact, 4 first-string  players suffered a very aggressive flu coming back from a recent tournament in Russia with polar temperatures.“

Looking at the near future Francesco Angelini foresees: “Our primary goal has always been to hire the best players. Certanly, we will work in this direction and our task would be facilitated if we succed in changing the rules of the Italian Federations which at the moment does not allow non-Italian players to participate. [* Ranked third in its group Team Angelini is forced to the play-offs  to avoid relegation to the second category [ed.].

As to the decision of the Sport Court of Coni Mr. Angelini states: “The court didn’t reject our request, but they themselves raised an exception about the jurisdiction over the matter, stating that they haven’t the power to repeal the claimed laws, declaring themselves being not competent on the matter. The Court, however, considered that Italian Federation ‘ s rules  – which limit the foreign players participation – are justifiable for sports and technical  reasons. On the other hand, the Court hopes that the Italian Fed and Olympic Committee take action to change these rules. Moreover, the Sport Court argued that an appeal to the Ordinary Court is enforceable and that the Ordinary Court has the power to override the rules in question.“

Co-produced by Laura Camponeschi for Neapolitan Club and BridgeTopipcs.com