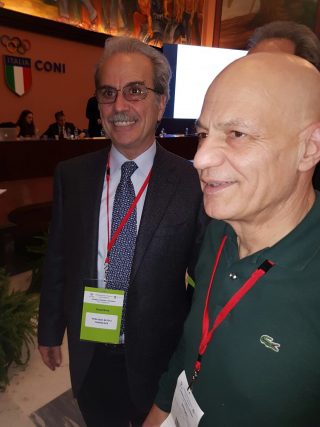 Yesterday, as soon as Neapolitan Club posted Duboin’s article, I asked Mr Francesco Ferlazzo Natoli (President of the Italian Bridge Federation- FIGB) for a reply, and he promptly send me his statement:

Thank you for flagging Duboin’s post, which I had heard about, and for offering to publish my response.

This is the first time I make a statement on a bridge website, and I am glad to. When I became president I said I wouldn’t but: 1) Neapolitan Club is a reputable magazine, 2) you have been kind to contact me, and 3) I respect the author of the article I am responding to, who is also on the WBF board, although in these circumstances I do not understand why he got upset.

I think Giorgino is advocating for Eleonora (Duboin’s wife/ translator’s note) and in theory I should agree with him because my wife also plays in the team which will not be able to play (she is the only wife I have and I would never treat her wrongly).

We booked the 26/27 September on the basis of practical reasons and this actually involved a number of other teams, since we also had to run the playoffs and playouts of all series.

It is inconceivable that our office would ask each club for their availability, and we never do that under any circumstances.

However the Federation is known for its willingness to accommodate, as far as possible, any special agreement between opponents, in order to facilitate the practical and financial arrangements.

For this reason the Federation accepted the request of the finalists to play in Milan on 19/20 September, although this would have caused additional expenses to the Federation. Subsequently, the teams playing for the bronze asked for the same date.

We thus offered other teams in the A series to play the playoffs on the same date, but they could not make it so we told them they would play the following weekend and nobody complained.

Mid August, Idea Bridge raised that they could not make the 26/27 September. The Federation did not ask the teams to find another date but the organising committee of the championships was informally involved in their conversations to find a suitable date. The Federation was going to accept the date they agreed.

However the two teams did not find a mutually suitable date, despite the fact that the only deadline was to play before the end of 2020.

These are the simple facts!

Why is my friend Giorgino upset? Does he think the federation should have picked a new date without asking either team? Are there any national or international examples of this happening before?

I am shocked that the Federation (whose leaders, employees, collaborators displayed the outmost kindness and willingness to help) is accused of organising the event poorly and that this accusation is put forward with inaccurate information. I cannot imagine that there could be a hidden agenda behind this complaint.

Thank you again and kindest regards