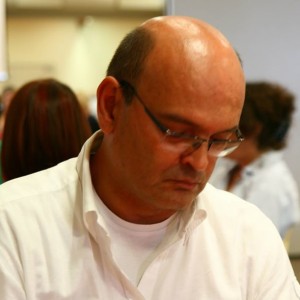 96 teams have signed up to play in the 7th edition of Rastignano Bridge Tournament. This is one of the most important bridge competitions in Italy. Its organiser, Andrea Dalpozzo, is a council member of the Italian Bridge Federation (FIGB). We interviewed him to talk about Rastignano’s success and about Italian bridge, in light of the results of the latest Europeans (the Italian open team did not qualify to the 2015 World Championships).

Andrea, Tell us about shadows and lights of the 7th edition of Rastignano’s tournament. Let’s start with the positive aspects.

For six years we have been struggling with a venue too small to accommodate the growing numbers. We started with 56 teams in 2008 and we had 82 in 2013. We added some facilities to the club which hosts the event, but although this is a lovely venue, it cannot provide the best comfort to the players. This year we moved the tournament to the Congress Centre Unaway in San Lazzaro di Savena. This modern venue is perfect for bridge and can accommodate up to 150 teams. It is on one floor (2300 sqm), accessible to disabled people, soundproof, with technological devices, it is close to the motorway and has a private parking with 250 places.We organised Saturday evening’s dinner in the namesake four star hotel next to it, which has over 150 rooms and 250 private parking places. The conditions are perfect to start a new adventure with 96 teams, which could have been more (we had 101 teams on Friday morning), if some friends did not call off last minute due to unforeseen circumstances and if other events did not clash with ours. Let us not forget about the mixed pairs held on Sunday morning. 120 pairs signed up for it and this is a great result for a new event. Overall I can say that we have way more lights than shadows, which will be certainly improved in our next edition.

If there is something negative in this successful event, could we say that it was the absence of big names, both Italian and foreign? Why? Does the recruitment strategy not involve world champions?

At the same time as Rastignano, the Cavendish tournament was being held in Montecarlo, so some players who usually come to us went there. Nonetheless players such as Arturo Franco, Andrea Buratti, Mario D’Avossa, Maurizio Pattacini, Bobo Cambiaghi, Furio Di Bello, Matteo Montanari and many other players at national level took part.In previous editions Alfredo Versace (who won in 2011), Gianfranco Facchini, Valerio Giubilo, Arrigo Franchi, Massimo Lanzarotti, Leonardo Cima and others such as Simonetta Paoluzi and Margherita Chavarria participated. In the future we hope that more world champions will join us, but Rastignano wants to remain a bridge festival and not an invitational tournament. If the big guns want to join the party, we will welcome them and will be honoured to meet them. We know we will lose against them, but the satisfaction to play them will overcome the sadness for losing. Or you could maybe beat them…if so, you will have a story to tell to the generations to come. From rumours on Facebook, for instance a post by Norberto Bocchi, it seems that the Lavazza team may put Rastignano in their calendar. It would be fantastic. We wait for the confirmation.

How much does it cost to run this event and how do you meet all the financial needs?

The live costs, including prize money, are close to 30.000 euros. This does not include the organisational costs, marketing and planning, which I personally do, because I am passionate about it. It normally takes me a couple of hours a day throughout the year. All members of Rastignano Bridge Association constantly help me and set up the playing venue for free. Expenses are partly covered by the registration fees (around 40%) whilst others are covered by sponsors. This year our main sponsors is Allianz Bank (represented by financial advisor Giulio Maimura), but I would also like to mention the other sponsors, whose role is just as crucial to the successful running of the event: Iconsulting Spa, Casalini and Co Srl, Novatek Srl, Techno Hse Engineering Srl, Scavitalia Srl, Tambaro Costruzioni, AA Coperture Srl, Ediscavi Srl, Progeco Srl and Dalferro Srl, and also Mercatone Uno Group. If you look at past editions’ fliers you will see that some sponsors have been with us before (Mercatone Uno, AA Coperture Novatek have also been main sponsors). They believed in us. We hope to have paid them back for their loyalty. But the best is yet to come.

After this year’s success, are you already working on the next edition? How will it be?

It will run on two days and we will maintain the same schedule, but I do not rule out changes to improve it, if necessary. We will focus on the mixed pairs competition, where we have ample growth margins. It should not be perceived as a consolation event. In order to make it an important event we have run it as a 3 session event with 33 boards. Players enjoy playing mixed competitions and this is proved by the many pairs who have come from far just for this event. The venue will still be the Congress Centre Unaway in San Lazzaro di Savena. So far we have put the date in the calendar (September 5-6, 2015) and I do not think there will be any issues in renewing the agreement. We would like to add some parallel events, not necessarily bridge competitions, and in this respect the relationship we have with the car racing field may be an opportunity. Bridge and cars? Why not! We would like to organise a guided tour of Bologna’s city centre on Sunday morning, so that players and friends have an alternative to playing. The popularity of the even suggests a change in the prize money (this year 9000 euros for the winning team and 3500 for the winning pair), but this mostly depends on the marketing campaign. In order to increase the prizes we would need a main sponsor to share all different organisational stages (preparation of fliers, on-line advertisement, venue set up). I think they would get a positive impact on their brand image, in exchange for a relatively small effort.

In addition to organising Rastignano’s tournament, you have been a FIGB Council Member since last April. You have the honour and challenge to substitute Guido Ferraro. Are you enjoying this new experience? What is your role? What do you think about the current situation of Italian bridge?

In the latest elections I was in Bobo Cambiaghi’s list, and although we lost the presidency, Guido was elected Council Member and I was the reserve. Guido left a big gap on the national and international bridge scene. Not only was he a great player, but everyone told me he was a fantastic person. I remember his Bridge Rama commentary at Salsomaggiore’s championships. His knowledge and irony were such that people always left the room enthusiastic.

FIGB is too far away from local clubs. I have been in the committee of Rastignano Bridge Association, and a Regional Council Member for Emilia Romagna for many years. I am thus fairly experienced at local level, but I am new to the FIGB environment and in these first months I am trying to understand how things work. Although I sit in the opposition, I have offered my help to President Medugno in order to help the game at national level. Previous administrations have not done their best, but we cannot yet see that things are improving. I hope that we will soon develop the necessary measures to raise the membership numbers. Local Associations are suffering and I can see it directly: we need to work hard on this.

Italian Bridge is currently facing two challenges: The shocking exclusion from the Wolrd Championships and no young players involved in the Open category. Do you have any comments about this? Let’s start with Opatija…

The European results are partly the consequence of a choice made during the electoral campaign. We knew that trials would have weakened the Open team. They were probably hoping that the result was going to be better and that they were at least going to qualify. The Open team who represented Italy  (Francesco Angelini, Leonardo Cima, Valerio Giubilo, Lorenzo Lauria, Alfredo Versace, Antonio Sementa) was nonetheless a good team and their result does not match their skill level. Something did not work.

What did not work?

I am not competent enough to make a technical judgment. I was not there and I do not know if there were issues in the group. I read a comment from Alfredo Versace about this, who honestly said that he was sorry for the result and defended the team, stating that they all did their best. I feel that the start was unlucky. The need to catch up, which we are not used to, generated further pressure and this did not help. It certainly was a disappointment, somebody called it “Bridge’s” Corea (*this refers to when the Italian football team lost in Corea, Translator’s note), but I hope our Open team will recover as quickly as our football team did.

If we want to win again, I do not think that we can run trials at the moment. The gap between top players and others seems to me still too wide, although some alternatives are becoming available. For the future, we need to do more for the youngsters, if we have the resources. We need to evaluate whether what we have done so far was the best we could, given the available human and financial resources. We could change a few things, taking inspiration from the Women’s where the results are a testimony of the hard work. I think we should involve some of our world class players. In the short term I would thus try to rebuild the Open team who won everything, asking them to carry on for as long as they can, whilst we wait for new talents to emerge.