In the second round of the Columbus Alt, we noticed a hand that lends itself to a comparison with the Neapolitan Club System. In both tables, the 3SA contract was reached; in a table the opening was 1♣ followed by no trump rebid by the Opener; at the other table the opening was 2SA. The Opener lacked the spade’s control; the Responder had it, but he lacked the club’s one; neither of them made any attempt to find out the stopper in their weaker suit.

Bidding the hand by Neapolitan Club, the final contract is the same, 3SA as at the other two tables; but the logic is different. 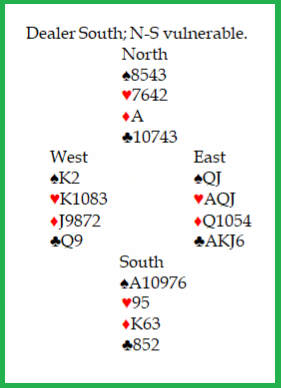 The Opener shows a 17+ point hand by any distribution. When the hand is balanced, the Strong Club isn’t better than the Standard; the merits of it are best seen in the one-suiter and unbalanced hands from 17 to 22 points, in which for the game it suffice values with which the partner would pass the natural opening, and in the natural suit openings, whose variability shrinks from 12- 22 points of the Standard to only 12-16.

The 1♥ answer shows two controls, i.e. an ace or two kings, and is forcing up to 2SA. There could be other points by queens and jacks.

The Opener can’t bid 1NT because it lacks the stopper in one suit. In the true natural system, that is the Culbertson’s in the 1930s, the main aim was to warrant the soundness of the no trump contracts, because in team matches 3NT is better than the suit contract with the 5-3 fit. In Neapolitan Club, the no trump bid without a stopper happens only exceptionally or in rare conventional sequences. Furthermore, there is

the freedom to declare all suits at least fourth according to the ease to do it, and without worrying about anticipating the longer suit; this is called the Principle of Preparedness, and it also originates from the old bridge.

The Responder’s diamond can be fourth with an head, or longer with or without head, or unique four card suit in 3343 pattern. Until contrary evidence, however, the Opener assigns a head to the suit bid first.

This support is very inviting, but not forcing; however, the Responder must take into account that the Opener might not be able to close at 3SA due to the lack of a stopper, as indeed it is. Therefore, he must make any effort to keep the bid open; but in this case it was easy.

3♥ shows the stopper, not the suit: the Opener can’t have hearts; he would have said them instead of 2♣, or over 2♦, anticipating the less important information of the support in the minor.

3♠ is the fourth suit and asks for the spade stopper, the same function as in the Standard.

The last note is that, without transfer or relay, the hand with the weakest suit will become Declarer, whereas in both tables at Columbia Alt the contract was played by the opposite hand.