The WBF decided to revise the Victory Points scoring system. The task has been assigned to a Committee, chaired by Ernesto d’Orsi, co-chaired by Max Bavin, and composed by Henry Berthe, Bart Bramley, Peter Buchen, and Maurizio di Sacco. The recommended changes have been adopted by the WBF executive committee and they will soon be used starting with the next World Championships (Bali, September 2013). The announcement has been made during the Mind Sport Games in Lille (August 2012), with a note published on the Daily Bulletin (n. 10, 19th of August). The IBPA (International Bridge Press Association) Bulletin also quotes the announcement. This news has left Ron Klinger, popular journalist and writer, perplexed. Thus, he wrote a letter to the Committee. John Carruthers, IBPA Bullettin Editor, devoted to this topic his last editorial.  And Bart Bramley, committee member, replied. We publish here for our readers the letter by Klinger, the Editorial by Carruthers and Bramley’s replay. All the contributes has been published on the IBPA Bulletin n. 572, 10th September. 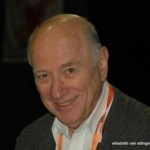 Ron Klinger’s letter – Dear Sirs (the Scoring Committee – Ed.), I read with interest the announcement in the Daily Bulletin and applaud the idea of each IMP having equal values (this is not the case – each IMP has value, but not equal value – Ed.). My suspicion is that VPs to two decimal places will not be popular among your average players at club level or at national level. I understand that you are all experts in this field, but would it be possible to have a simpler approach with the same objective (every IMP counts)?

Why not make each IMP=1 VP. For each match, each side starts at 100 VPs. Winners add the net IMPs winning margin to this total with a cap, Losers deduct the net IMPs loss from this total. The calculation is simple and does not need to have a specific scale for each set of boards, just a note of the caps for each side. The Winner/Loser columns in I below use the current WBF scales with different caps to reflect the present 25-0 scale. The columns in II use the current WBF scales with the caps at 25-2. 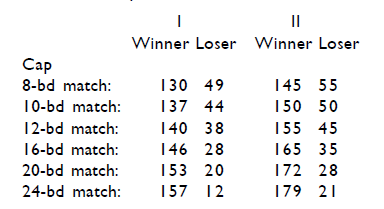 Simple example: Team A beats B by 23 Imps: Team A 123 VPs, Team B 77 VPs. This is easy to calculate, has no decimal points and no minus scores. Using the 25- 2 caps means the scores will always total 200. Trust this might be helpful to you. Regards, Ron Klinger, Northbridge, NSW. 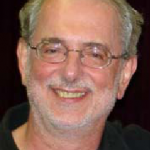 and comprised of Co-Chair Max Bavin (ENG), Henry Bethe (USA), Bart Bramley (USA), Peter Buchen (AUS), and Maurizio de Sacco (ITA). After “deep and long analysis”, the committee has recommended changes that have been accepted by the WBF Executive and that will commence with the next World Championship.

The philosophy of the committee was twofold: (i.) “every IMP counts”; and (ii.) IMPs closer to zero count more than those further from zero. The crux of the change is that the VP scale will now have a range 0-20 VP, to two decimal places. IMPs closer to zero ( a draw) will never be worth more than previous IMPs, as could happen now, In the current scale, if a 6-IMP win is16-14 VP and a 7- or 8 IMP win is17-13 VP, that seventh IMP is worth more than the eighth. One could not have put together a more august committee and the result for the players is definitely a step in the right direction.

However, we have a concern with the accessibility of the method for the average player. In an era when bridge is on life support systems in many jurisdictions, we should be looking at ways to simplify the game for more universal appeal. Even for the top players, when the question is asked, “We won by 23 IMPs, how many VPs is that?” no one will know the answer without referring to a table (those of us old enough will be reminded of logarithm tables as they were similar in nature). Furthermore, when you’re ahead or behind by 4.73 VP, it will be more difficult than now to envision how much you need to win by to maintain the lead (or catch up). The committee took the view that, in a round robin formatted event, there is some value in beating an opponent (but not as much as a Win-Loss scoring method would afford), thus the contracting IMPs-to-VPs schema.

However, we see no reason for this being so – it is certainly not an intrinsic virtue, but an assumed one. In a round robin, to qualify eight or sixteen teams for knockout play, you want the eight (or sixteen) teams that have played the best to qualify. Wouldn’t this be exibited more surely by a straight IMP-to-VP conversion (subject to a cap in each match)? Thus, if 100 VP were at stake in every match, 50 IMPs would be a blitz. About three IMPs per board seems a good standard for a blitz. In short, we agree with the philosophy that every IMP should count but disagree with the conclusion that some IMPs should count more than others and would prefer a straight one-to-one conversion for simplicity.

We’d go further yet and try this experiment: score the round robin at point-a-board (15-board matches for a round number) with two points for a win on a board and one point for a draw, thus 30 points would be at stake in every match (or 1 and 1/2 as in North America). Then score the knockout matches the same way. What could be simpler?

Bart Bramley’s replay – I disagree strongly with “all IMPs count the same”. While it fulfills one of our goals (“all IMPs count”), it violates another (“IMPs near zero count more”). Simplicity is a desirable feature in a scoring system, but your suggestion goes too far. We have used scales identical to these in USBF events for about 10 years, with no serious complaints of which I am aware. Players have a fine “feel” for how they are doing, as the 0-20 range is the same as it always was in ACBL events, except with finer precision.

The USBF scales were created by a committee consisting of Henry Bethe, Chip Martel, Jeff Rubens and myself. Does that include enough “top players” for you? While the addition of some of our younger stars would have been nice, I seriously doubt that their mathematical sense is a lot different from the math sense of the “oldies”. Please note that nearly all members of both committees have a strong mathematical background.

Your idea completely removes the concept that beating the current opponent should contain value. Rather, it reduces a round-robin to one long match against a rotating cast of opponents. Piling on against weak opponents is one of the essential features of doing well. We agree that accumulation of VPs should stop at a certain margin, the “blitz point”.  To recognize the existence of the blitz point is to acknowledge that there is a point of diminishing returns in a blowout win. Where we disagree is in the value of the IMPs on  the way to the blitz point. Our committee deems it obvious that the value of IMPs should decrease gradually until it becomes zero, rather than abruptly changing from “full value” to “no value”. Regards, Bart Bramley, Dallas.