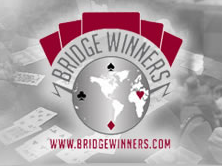 This morning Bridge Winners has posted the following statement:

Bridge Winners has received overwhelming evidence alleging improper communication between the world’s #1 and #2 ranked bridge players, Fulvio Fantoni and Claudio Nunes, during the 2014 European Championships. The pair was on the Monaco team that placed second in this event, earning Monaco a spot in the upcoming Bermuda Bowl.

Many people worked on reviewing Vugraph and video evidence, but we would like to especially give credit to Maaijke Mevius from the Netherlands, who originally contactedBoye Brogeland with her theory that the angle at which Fantoni and Nunes placed their card on the table when they led conveyed information about their holding in the suit. Brogeland immediately recognized that she was onto something, and enlisted others to assist him, including Ishmael Del’Monte, Brad Moss, Kit Woolsey, Jeff Meckstroth, Chris Willenken, Norman Beck, Tom Hanlon, Per-Ola Cullin, and Steve Weinstein. From there things moved quickly, with many people reviewing hours of footage and testing the theory.

Mr Jean-Charles Allavena, President of the Monaco Bridge Federation, has reassured us that he will clarify Monaco’s stance as soon as possible.