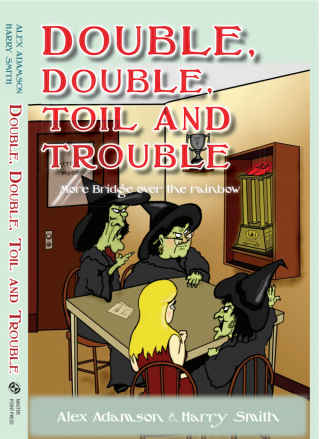 You have most likely heard of the magical land of the Wizard of Oz, but did you know Dorothy, the Lion, the Scarecrow and Tin Man were bridge players?

Bridge Over the Rainbow is a series of gripping books published by Master Point Press, telling the adventures of this strange bridge club and its characters. The first, If I Only Had a Heart, was on the shortlist for the International Bridge Press Association world bridge book of the year, while the follow up, Bridge Over the Rainbow, was well reviewed in Britain, the USA and Australia.  Double, Double, Toil and Trouble is the third and final book in the series: a real page-turner which will make you chuckle and leave you wanting for more!

The authors are two Scottish Open Team players: Alex Adamson also Captain of the Scottish Women’s Team in the Venice Cup, and Harry Smith, also captain of the Senior Scottish Team in the D’Orsi Bowl.  Indeed the first book that the two of them wrote together, Scotland’s Senior Moment, was the inside story of the first ever appearance by a Scottish team on the World Championship cycle.

We have asked Alex and Harry a few questions about the book.

We could consider your series akin to Victor Mollo’s popular books. How did you come up with the idea of Bridge Over the Rainbow? 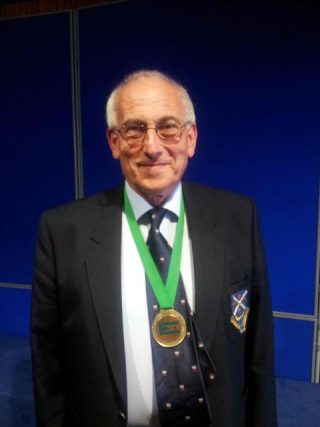 HARRY:  Some years ago, Alex had started some stories using these characters, but they were far from finished.  After Scotland’s Senior Moment, we were looking for a new project to work on.  We knew that we liked writing together and thought that between us we could develop something really novel with this idea.  The joy of the characters is that everyone knows that the Lion will be cowardly, the Scarecrow will be brainless and so on.  You know what you are going to get from the Wicked Witch of the West!  We have taken a little liberty with the Tin Man, making him truly heartless.

ALEX:  We have found that when one of us writes the first draft of a chapter then the other one can run with the ideas and improve on the original!  Far from being protective with our ideas, we both look forward to getting a revised draft back, wondering what fun things the other will have added.  After it has been back and forwards four or five times we have something much better than either of us could do alone, and it hardly makes sense to say that a given paragraph comes from one or other of us.

Where do the hands come from?

HARRY:  The hands all come from actual play.  It is generally in the post-bridge analysis that we see something surprising or unusual.  Sometimes we have to change a few spot cards – simply to make the point of the hand clearer.

ALEX: Some of them are hands where one of us got it right at the table.  But many are ones where in looking at it later you see a defence or a line of play and think, ‘yes, I should have thought of that’, or perhaps, ‘what reason could anyone have for doing that?’

And which is your favourite chapter in the new book? 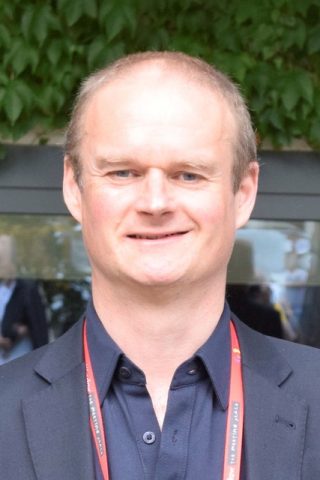 ALEX:  We both have to like every chapter before it was allowed to go in, but I really like the last one.  It was planned well in advance, and the plot lines all had to be brought together for the grand finale.

HARRY:  I really don’t have a single favourite.  I love it when we find a logic for the Scarecrow to make a play that Garozzo at his best wouldn’t have found.  For me the books are about the characters.  Not only do the deals come from real-life, so does so much of how these characters interact. The discussions between the players are as much fun as the play itself.

Your readers want more! Is this really the last book?

ALEX and HARRY:  We have put a lot of work into these books over the last few years and we hope we leave the characters in good heart and without too many loose ends.  We won’t say ‘never again’ but for now at least our thoughts are turning to other projects.