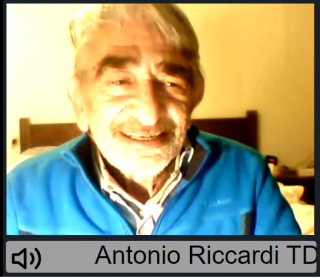 Antonio Riccardi: I am WBF Head Tournament Director with Laurie Kelso. In the EBL, I am the Head TD for the European Championships. Within the FIGB I am Head TD and I have been responsible for the Championships for the past few years.

LC: Many are surprised that you were not directing the Open Team Trials, held in Salsomaggiore last weekend. Why did you not do it?

AR: I am not able to answer. At the end of the Clubs Pairs Championships, Sunday 10th October, the Counsellor Stefano Back called me to say that the President (Mr. Francesc Ferlazzo Natoli) was not happy with how I managed the first phase of the Open Trials and he had ‘put me on ice’ until the rest of the year.

LC: Is that what Back said?

AR: Yes. I have a good relationship with Back, and he was trying to make the news easier to digest. But the meaning was clear. This decision is in practice a suspension, although there has been no official communication. Back also told me that the President’s decision would not have an impact on my role in the TD school: next weekend I will assess the new cohort of aspiring TDs.

LC: So there is no formal suspension, or any disciplinary action against you?

AR: No. Otherwise I would have been notified.

LC: You only got a call from a Counsellor, who told you that the President decided not to call you to direct any events until the end of the calendar year.

LC: Have you asked for an explanation?

AR: Obviously yes. I sent this email to the President and the whole FIGB Committee on Monday 11th October:

‘Good morning, I was told that I would not be directing any competitions between now and the end of the year (7 events). The rationale given to me was the first phase of the Open Trials, which was not played, and the captains’ meeting on 29/09/2021. My professionalism and integrity are recognised and appreciated across Europe and the World. Therefore I would like to ask why you have made this decision. I am available to discuss further, kind regards’.

LC: What did they reply?

AR: I have received no answer so far.

LC: Have you pursued other avenues to find out more?

AR: No. I received a second call from Back on the 17th October about the exams for aspiring TDs and I took the opportunity to ask him about my ‘suspension’. He did not go into details but I understood that the President was unhappy about a difference between the TD report and the National Sports Judge’s statement during the hearing on 29th September. I tried to find out more but this is the only explanation I got and it was still an informal conversation.

LC: Can you tell me more about what Back meant? What happened at the hearing? What exactly did the President dislike?

AR: As you can imagine I am just guessing, but after writing the report, I answered the Judge’s questions and delved into what I had already written.

As the hearing minutes show, this is what I said:

‘That afternoon it was chaos. Players were coming in and out of the play area. Nobody was sure whether to play or not. And nobody knew what was going to happen if the Tribunal excluded Bortoletti’s team. Lauria demanded an answer to the four teams’ request to postpone the event, prior to deciding whether Vinci was going to play’. (1)

This statement was not written in the report, but I described the facts. When the Judge asked, I explained what I summarised in my report:

‘Players started arriving around 1.45. Most were unhappy because the programme had changed the night before, since the Tribunal decided to readmit Bortoletti’s team.vAdditionally, a new hearing was scheduled for the 5th October. Players asked (verbally and in writing) to postpone the Trials to the date scheduled for the second phase. They had two reasons for this:

a) check whether the readmission was confirmed, to avoid playing a phase that could later turn out to be pointless

b) give each team more time to decide what to do if the readmission was confirmed’. (2)

As you can see, these are not different versions, but rather a more detailed description prompted by the Judge’s questions.

LC: Do you think this could justify your informal ‘suspension’?

AR: Llet’s start by saying that this ‘suspension’ is very strange, because it is not based on a formal decision. In practice, TDs are hired for each competition, so if they simply stopped calling me, there would have been no issue. The issue is that I was given vague excuses in a phone call, and I am disappointed to hear about the President’s dissatisfaction.

LC: Was the President unhappy about anything else?

The President stated his point of view (and I quote):

“The Trials are not a competition but rather an internal process to identify the team to represent Italy. There is nothing to rarify. Nobody played and a phase was skipped due to two teams’ withdrawals. I do not understand the reasons for the appeal.” (1)

Following this, the Judge asked me whether the Trials were a competition. I said yes. Here is another quote:

“Judge: do you believe this first phase is a competition? Riccardi: I believe so”. (1)

That Trials are a competition is supported in many ways including the fact that they are listed as such on the FIGB website. I could not have answered differently.

LC: So, you answered the Judge’s questions and your answers upset the President.

AR: I think this is why the President is unhappy.

AR: Because many rumours have been going around on social media. People talked about a demotion, which is false. Some said i was not in line with covis rules and this is also false. The FIGB’s lack of clarity led to annoying suspicions and misinformation.

LC: You sound upset by this situation, in addition to the reputational damage, have there been any practical negative consequences?

LC: Are you planning to take further action against the Italian Federation?

AR: I am not ruling out any possibilities.

LC: Please tell us your view of the Italian Federation’s actions around the Trials.

AR: I can only talk about the bits that involved me. We could have foreseen that the situation was going to be difficult on the 14th of september. I think having a member of the FIGB Committee with decision making powers would have been not just preferable but also necessary.

LC: To round up, lets remember that on social media many expressed their solidarity with you, even from abroad.

AR: This is true, but i am still disappointed, I fear that my relationship with the Federation is compromised… But who knows?