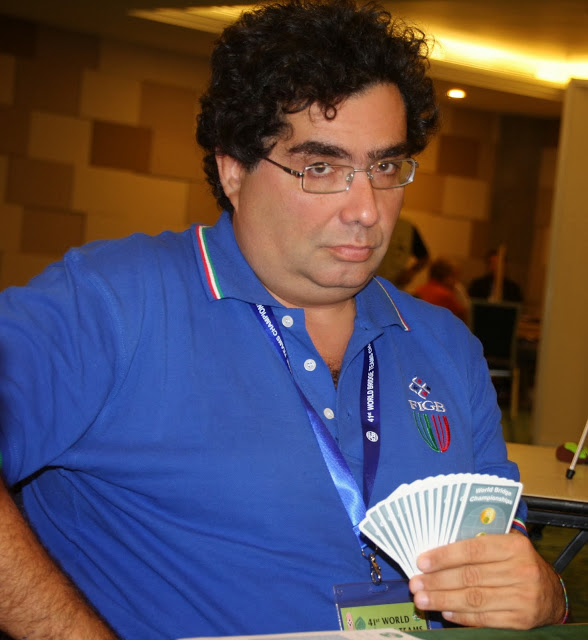 Hello Alfredo, I am very happy to talk to you again in such nice circumstances. Italy wins the Bermuda Bowl again, the previous victory was in 2005: let us start from there.

In 2005 I won my first and only World Championships in Escoril, playing with Lorenzo Lauria: the rest of the team was Bocchi-Duboin and Fantoni-Nunes. Paradoxically, I now played the final against one of these pairs (Fantunes), who contributed to winning the Bermuda Bowl in 2005. Today we conquered the trophy which we disappointingly missed in Veldhoven.

I remember the bitter disappointment in Veldhoven and that in those circumstances you stated that that Italian team was the strongest for the past 20 years.

Yes, I strongly believed in that team and I thought we were going to win in Veldhoven. However, lately the general bridge skill level has improved, all the teams have become more competitive and winning is not easy. In Veldhoven the Dutch team, playing at home, was very motivated and inspired and they won in the last few boards. I have to admit that I was expecting us to win, just like this year in Bali.

Have you ever lost faith in the strength of this team?

Never. Lately, many have started to think that Italy was not as strong as it used to be, and maybe also because of this we have come here very motivated and ready. Many fans and players had started thinking that Italy had become a team like many others. On the contrary my team mates and I knew this was a very strong line up. I believe that at the moment we are the strongest team from a technical point of view, and we studied and trained more than anybody else. Thanks to our local sponsors, Angelini for Lauria and me, Lavazza for Bocchi-Madala, Duboin-Sementa, we have come here in top shape. Thanks to our sponsors we are able to always study, get ready and improve our systems to make them more competitive.

Does the strength of Italy lie mostly in its bidding system, rather than in declarer’s play?

This was more true in the past, because now thanks to Internet and BBO people can see us play and adopt our conventions. You can see how some conventions studied by Lauria years ago are now spread worldwide. New ideas invented by us are now known to everybody, and the gap between different systems is decreasing. One of the criticisms we received argues that we play well but we play old-style, or not as aggressively as Americans or others do. On the contrary, these World Championships have proved that our bridge is modern and can win. 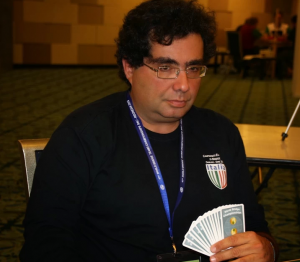 What are the strong features of the Blue Team?

First of all, having an up-to-date and modern system, which gives problems to the opponents, while at the same time allows us to be precise. Secondly, having extraordinary players. Madala’s arrival has been crucial: we call him “the young genius”. He is young, full of enthusiasm and desire to win. Today I remember with a smile all the fuss about him being allowed in the Italian team. Many complained about Maria Teresa Lavazza, who chose Bocchi-Madala over Fantoni-Nunes: facts have proven her right. At that stage, Italy needed new energies and Madala deserved a chance. Now we have to admit that Madala is a prodigy, and Bocchi is his ideal partner. Norberto is an established champion, extremely solid: he can always get the best out of his partner and place him in the best position. Norberto is able to do this because he has the attitude of a winner.

Could we then say that this victory partly stems out of Maria Teresa Lavazza’s efforts?

This victory belongs to her. Completely. Even though she was not with us in Bali, this victory is hers. We have to acknowledge that she built this team: she wanted this team and endured the frequent complaints. I remember the heavy atmosphere when Lavazza did not pick Fanotni-Nunes for the European Championships in 2010. Truth be told, madam Lavazza always held Claudio and Fulvio in the highest regard, but she did not want to miss a chance to try a young talent such as Madala. Maria Teresa bet on Bocchi-Madala, and she was right.

How did you react to Maria Teresa Lavazza’s resignation?

I would like to stress again that the achievements of the national team are due to the sponsors who coach and train players. I was personally disappointed that she was not here with us, because this is the team she built. She matched the pairs Sementa-Duboin and Bocchi-Madala. I personally wrote her a message after Bali, to thank her and share “our” victory with her.

Let us move back to the final in Bali, when –as you mentioned- you had to play against your teammates from 2005…

Claudio and Fulvio are excellent players and for what concerns their technique and professionalism I have no complaints. I do not like that they act like victims, i.e. that they portrait themselves to the world as if they were forced to leave Italy. I believe they are two strong players and they made a professional choice, this is all. Many Italians still believe that Fantunes have been wronged, but this does not correspond to the truth. For what concerns bridge, they are world class, and even though they lost, they played well. I would say that their defeat is due more to our good game, than to their mistakes: rather, I am slightly surprised by the Norwegian pair, who did not play up to its standard.

Did Claudio and Fulvio congratulate you on your victory?

I do not seem to remember.

Do you remember if other Monaco players congratulated you?

Yes, all others did.

And you do not remember if Claudio and Fulvio shook hands with you?

No, I do not remember. But I remember that I congratulated them when they won in Dublin.

Let us talk about Sementa-Duboin: many were puzzled because they did not play the final. What is the situation?

It cannot be denied that at the moment Giorgino and Antonio do not go along very well. However in Bali they proved to be real champions and played an amazing semi-final against Poland, masterfully closing that match just at the second round.. For what concerns the final, one of them did not feel well the night before, so they did not play the first three rounds on the Saturday. Then, since we were playing as well as they did against Poland, they preferred to let us play on Sunday as well. Duboin and Sementa’s choice is a proof of professionalism and team spirit, because the common goal was Italy’s victory. Their contribution, apart from the final, is massive: the score of the semifinal should speak for itself.

Since they did not play the final, will Duboin and Sementa lose the title of World Champions?

Duboin and Sementa are World Champions and will not lose the title. They will not gain any masterpoints from the final: they will only gain all the masterpoints for the previous matches, they only lose crumbs.

To bring this interview to a close, let us talk about Lauria. Do you think this is his last World Championship? Will he retire? Did you talk about it?

Lorenzo and I do not talk a lot about these things, I do not think he could retire when he is in such a good shape. Lorenzo still has strong motivation. I can only tell you that on the way back from Bali, he spent the time on the flight studying and editing the system…I think that somebody behaving like this still wants to play.

Alfredo, what lies ahead in your future?

I am running a new project which I care a lot about: the University of Bridge in Rome. I was born in Turin but I have been living in Rome for more than 20 years and I would like to create something to develop bridge in Rome. So, together with Leonardo Cima, my team mate in the Angelini team, we will start a new club where everybody can play, and also attend classes run by me and other qualified teachers. We are planning teaching tournaments and classes for all skill levels, run by highly qualified personnel. I will also involve two young Roman champions, Giorgia Botta and Margherita Chavarria, gold medal in Atlanta 2013 Young World Championships. The opening ceremony of the club is very soon, 8th of October. The president of the Italian bridge federation will be there together with many other champions like Benito Garozzo and Lorenzo Lauria. It will be a chance to celebrate together Bali’s victory.

Lorenzo is usually quite shy and does not particularly enjoy celebrations: are you sure he will come?

Well, now that you make me think about it, I am not so sure. I would not be surprised if he stayed at home, studying the next variation of our system…[laughs]