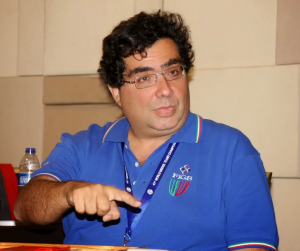 Laura Camponeschi: On the 31st of December, Angelini Bridge Ltd ceased its activity. This does not only mean the end of one of the most popular national and international bridge societies, but also the end of a great sponsor, Francesco Angelini. Alfredo: Lorenzo Lauria and you have played in Angelini’s team for over a decade, you have played with Angelini and you have been his teammate, can you tell me more about this decision?

Alfredo Versace: My personal relationship with Angelini is very long, and it lasted for over a decade.

Francesco Angelini is very passionate about bridge and when he decided to put together a team he called Lorenzo Lauria, with whom he had been friend since school days. My adventure with them began at the same time: we started with teams that were not very competitive, and grew to become one of the most successful teams in the world. With Francesco we won a range of competitions, both nationally and internationally. I think his proudest achievement is when he partnered Sementa to represent Italy at the European Championships in 2002 (held in Salsomaggiore) and won them with nearly two days to go.

As you know, in addition to his job, Francesco has always been passionate about two things: bridge and football.

LC: What do you feel now that Angelini Ltd does not exist anymore?

AV: Obviously Lorenzo and I are very sad for this decision. Playing in Francesco’s team has been an amazing experience. Not only was he a sponsor and patron, but also a great player and most of all a tremendous captain, a true leader.

He has been a friend to us, he respected us and was always generous. He had and has all the qualities that a leader should have. I really hope that Francesco will be able to play bridge again: this is one of his life’s passions. I am sure that this decision was difficult and torn for him, but clearly he currently cannot devote himself to bridge as much as he would like to. 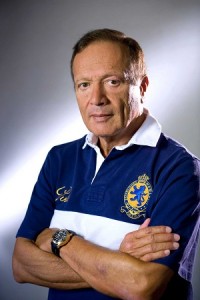 LC: How did the decision to close the team develop?

AV: Francesco is a winner: he has fun playing and competing at high level. Being a non-playing captain or sponsor is not an interesting role for him. He probably felt he could not give a substantial contribution to the team, and after Italy’s disappointing performance in Opatija he lost some of his enthusiasm. Francesco has a strong personality and his absence had a negative impact on the team, which did not manage to be as successful as it used to be. To sum up, Francesco decided to stop playing and he took the team with him.

LC: Did you expect this decision?

LC: Angelini’s decision means that Italian bridge as a whole is losing a great sponsor, a historic key figure.

AV: Surely. A piece of Italian and Eruopean bridge history is going away. Francesco played and won, and he also helped Italian bridge, together with Maria Teresa Lavazza (the other key sponsor of Italian bridge). Angelini and Lavazza have been the leaders of our bridge and their teams trained the champions which allowed Italy to win in Europe and worldwide.

LC: Angelini closed the team, at the same time when Maria Teresa Lavazza is playing a less prominent role in Italian bridge. What does the future hold for the Italian bridge federation?

AV: Italian bridge is going through a rough time. After Maria Teresa stepped out, Angelini’s decision is a significant loss. 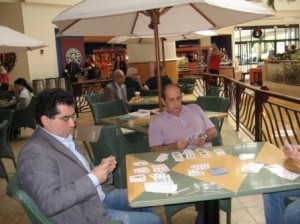 We achieved our results in the national team, because our long-term contract allowed us to practice with continuity. This has enabled Lorenzo and me to get to international events in good shape and motivated – and this was the same for Lavazza players. This is why I say that Angelini and Lavazza have been the leaders of Italian bridge and enabled their teams to achieve extraordinary international results.

Today we have a good number of young players, thanks to which we won the World Championships in 2016 (in Salsomaggiore) and we qualified to the Lyon World Championship during Budapest’s European Championships. The qualification to the World Championships is a true triumph, especially given that the field was very tough and that two out of three pairs had just started playing. Andrea Manno-Massimiliano Di Franco and Alessandro Gandoglia-Giovanni Donati gave a significant contribution to qualifying.

Giovanni Donati is very young and will play with Mustafa Cem Tokay in the next Nationals in Kansas City: he will replace Sementa and will be my teammate together with Lorenzo in Cayne’s team. This is a great growth opportunity for him. The US Nationals are a good challenge for all bridge players, champions from all over the world play there and the competition is very strong. It is a very challenging and demanding competition, but at the same time it gives someone like Donati an opportunity to grow and show his skills.

LC: Let’s stick with this topic: which open team will represent Italy at the next World Championships in Lyon?

AV: I do not know and I am not the one making the decision. There are many question marks.

LC: In what way? Are Lorenzo and you not going to play?

AV: To be honest, I think that a national team without Lauria and Versace would be surprising, but these days anything could happen. Lorenzo and I have represented Italy for years, and I am very proud of this. On the other hand, playing in the national team is a serious commitment, which takes many days. Without a strong sponsor like Angelini or Lavazza…let’s say that things change.

LC: Things do change. After the contract with Angelini ends, what will Lauria-Versace do? 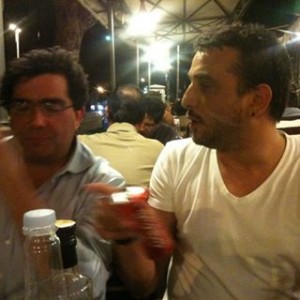 We will continue playing the Nationals with Cayne, whilst for other international tournaments we have yet to find a team. In the long term, I cannot be precise and I have started thinking that I might leave Italy. Angelini’s contract was full time, now we are available to take into considerations new proposals. I am currently a ‘freelance’ and therefore I am not ruling out the possibility to play abroad more often.

I am looking around and I am giving serious thoughts to the available offers. I am also trying to make the best of other opportunities: for instance, I will play the Cavendish in February and the Copenaghen Invitational with Tokay. We are also looking for a team in the US Regionals and the most important Chinese tournaments. I will play the next South American Championships with Juan Carlos Ventin.

A few years ago I would have never considered leaving Italy: now things have changed and all possibilities are open.