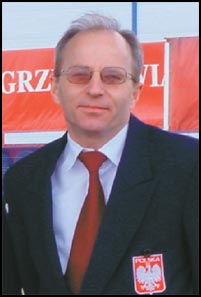 Marek Wojcicki was born in 1957. He is a chemical engineer and a well- known journalist and bridge writer. He has being playing bridge since 1970, in competitions since 1973. His main achievements include many national titles and international trophies. Marek is now one of the editors of the oldest Polish bridge magazine – “Brydż” and was the coach of Polish open team in Ostende where they have got the Bermuda Bowl qualification: so we asked him to present us the Polish teams that will play in the next World Championships in Veldhoven, The Netherlands.

The 40th World Bridge Championships in Veldhoven are coming. Marek, will you present Polish team for Bermuda Bowl to our readers?

It is the balanced mixture of the experience and youth energy… Buras – Narkiewicz: Both in their early thirties, performed very well and effective in Ostend, both full time professionals working for their market value… We expect the best.

Martens – Jassem: The names do not need any comments,  both very experienced, with good references at the game and also at the theory, technically perfect, but in fact slightly satiated tigers… If they play their best bridge, they are difficult to beat even for the best in the world, but will they? I expect so…

Gawryś – Kalita – “Diabolic” of the eighties with one of the young hopes of Polish bridge… Unpredictable, but surely cannot play below high standards. Both are real warriors…

And what about the ladies team for Venice Cup?

Brewiak – Sarniak – in the top of the Butler in Europeans from e few years, Harasimowicz – Pasternak – both with successes in mixed championships, Żmuda Kazmucha – newcomers with very impressive performance in juniors… It is first qualification to Venice Cup in history of Polish bridge… I hope they will continue good play in VC and build the ground for the next generation of the Polish woman players who dominate the juniors and girls bridge in Europe (and the world) – Żmuda and Kazmucha have their chance already, and the next are Taczewska (formerly Krawczyk), Sakowska, Grabowska…

Will you now draw a profile of Seniors Team (D’Orsi Bowl)?

I think it is the strongest favourite for the title from all Polish teams in Veldhoven.

Kowalski – Romański: Both with multiple World and European open titles, both playing at the top international bridge from eighties, still “beginners” in seniors, both technically perfect, probably could play also in open teams of numerous federations… in my opinion the strongest senior pair in the world now.

Lasocki – Russyan: Both technically perfect, real fighters, very experienced, but slightly matchpoint-orientated, when in good mood, dangerous for everybody.

How the team that will represent Poland has been selected? I mean: There was a sort of trials (like in USA) or a Technical Director had provided to the invitations (like in Italy)?

It was nominated by  the npc (not playing captain).

Balicki – Zmudzinski are the best Polish players in the WBF 2010 Ranking: They do not play for Polish team in Veldhoven: why?

They both are professional players making their living from bridge. As far as I know, they have contracted transnational with Zimmerman a long time before Ostend…

In Italy we have no trials. As you know, the team selection by TD Maria Teresa Lavazza for Ostend 2010 stirred considerable controversy because of the sensational exclusion of Fantoni and Nunes (number one and two in the WBF Ranking). To tell the true then Italy won the title and now we have the same team at Veldhoven. In USA the trials led to exclusion of Rodwell-Meckstroth and Zia-Hamman which are some of the world’s strongest pair. So according to you: What system provides the best representative?

I think everything depends on the resources. When you have many pairs on the similar level, like in USA, the trials are the best. When the field is limited, probably nomination pays better. Looking from the point of view of long term policy, trials are the best, but usually the federation officers want to have the immediate success

Finally, Which is your forecast for the next Bermuda Bowl?

I hope my team will win, but real life has some rights… If I would have to place the bets, the order would be Italy, USA 1, Poland.