The idea was born in 2003 when I suggested to few of my friends from all over ex-Yugoslavia that we should start some kind of competition on BBO, primarily to allow teams from small towns to be able to play serious bridge without travelling.

We started in spring 2004 with only 4 teams, playing on Tuesdays nights.  By 3rd edition the League was already international and we moved to Wednesdays nights. Number of teams participating was gradually growing and now is from 24 to 30 each edition. It runs twice a year (spring and autumn) and every edition we have some new teams. The only team having won twice is, so far, Turbin’s team: Ascoli Piceno.

The main ideas for the present (and probably future) format are:

The success of this League, in my opinion, is mostly due to friendly atmosphere, fixed playing time and, above all, great support I get from participating teams and their captains. Here I would like to specially thank to Jantien and Turbin but all are worth mentioning.

League’s web page is at http://bbo.splitbridge.hr

This edition (autumn 2009), we started play-off with best 16 teams and will have 2 weeks long holidays break. 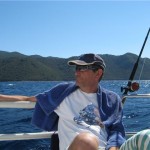