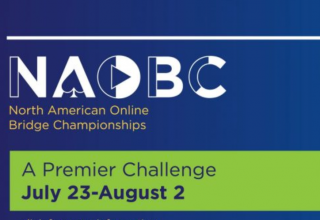 NAOBC Premier Pairs – The NAOBC Premier Pairs is open only to players who entered the NAOBC Premier Knockout (and are not playing the concurrent semifinal / final matches) or members in good standing who qualify for the Platinum Pairs (that is, players who meet one of three criteria: 1. 50 Platinum points in the three previous calendar years; 2. 200 Platinum points lifetime; 3. Grand Life Master or Platinum Life Master ranking). This is a four-session pair event on Saturday, August 1 and Sunday, August 2, with 24 boards played per session. Only the top 50% of the Saturday field qualifies to play in the Sunday final.