After the end of the Seniors Championship, won by England (Italy, 21st out of 24, not even will play the 2015’s Senior D’Orsi Bowl), the Women and Open’s are going to hot finals.

The hand. Being aggressive put opponents under pressure; they often don’t know exactly who the contract belongs to, and not rarely weird calls come out being good contracts. But, on the contrary, the partner as well doesn’t know what’s going on, and (more frequently), weird contracts come out being exactly the disasters that were expected to be.

In the following hand were in comparison the judicious Italian Caterina Ferlazzo and the aggressive Swedish Kathrine Bertheau (they share the same first name).

Let’s go in open room, now, where North opened 1NT, which showed good 8 to bad 13 points, sometimes even unbalanced. What did the Italian Caterina? Let’s rewrite the cards, and try to deepen the matter thinking as (I suppose) she did.

She hadn’t a way to land in 2♣: in her conventions, the direct call was artificial for majors, and the double showed a generic opening with 12+, and it was very unlikely that the partner could response 2♣. Besides, the partner might response 2♦ or 2♠ over the double, and, if the contract belonged to opponents, they would find the business double, and now? It is better to play 2♦ or 2♠ doubled in a 5-2 fit (but 2♠ might have been even 4-2), or take out with 3♣?

In that book Culbertson stated the “Rule of Two and Three”: a level two overcall must be made with the expectancy to make the contract if the partner who hasn’t yet bid has two or three winning tricks; two when vulnerable, three when not. Thus East should have six winners for level two overcall, or seven for level three; but she can count only five or five and half. From an aggressive view point the difference seems not so great, but it must be noted that, in order to count untill five and half, East needs of three entries in dummy for the three finesses, one in hearth and two in trump.

Back to Culbertson. He added: “Furthermore, when vulnerable, the trump tricks in the player’s hand must be sure winners, that is, calculated with reasonably unfavourable rather than with ‘average’ trump distribution”. Italics in the text.

Summing up: the judicious Caterine passed to avoid the risk to bid her hand at level three; the aggressive Kathrine bid the three level at once. This was the complete hand: 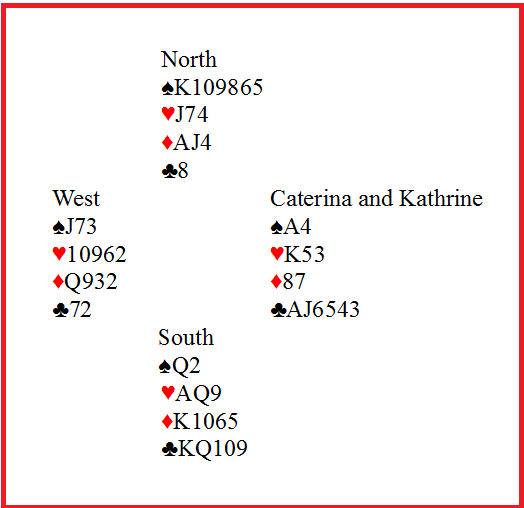 In open room the Swedish North-South, not disturbed by Caterina, got an easy 4♠+1, +450 for Sweden. In closed room, instead, the Italians, disturbed by Kathrine’s 3♣, didn’t find their game contract; they not even seeked it, but doubled 3♣, setting -5, 14 IMPs to Italy.