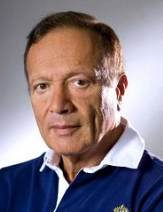 In the semifinals Angelini defeated Reggio Emilia by 209 -61 and Val di Magra defeated Villa Fabbriche by 174 – 88.