Vanderbilt 2013: The naked King. The Danish writer Hans Christian Andersen had an unhappy childhood, poor and with severe familiar problems. As many children he sought in the fantasy world the happiness denied him by the real one, but with an unusual behaviour: he told his fables to his little friends. When grown up, still Andersen told fables, but always smiling to children, always smiling but without forgetting that the children weep as often as they laugh: in Andersen’s worlds the happy end wasn’t compulsory.

In the tale “The emperor’s new clothes”, two cheaters made precious new clothes to the emperor; these clothes are special not only for their beauty, but also because stupid people can’t see them. Thus the emperor exited naked between the crowd; all cheered him – all were as intelligent as him − until a child scream: “He’s naked!”

The following hand was played in semi-finals; in all the four tables the auction was 1NT-2♣; 2♦-3NT; in both matches the result was push, either made or -2. 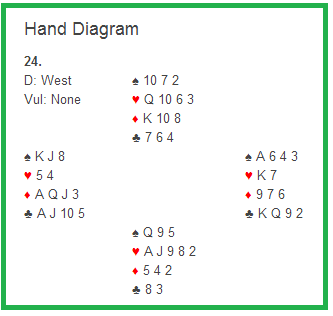 One of the fourth North opened by ♥3, setting two. It’s impossible to say which major is lacking, but spade looks better because North is the poorest of the defenders, so with little chance to take the lead after the defending suit is established. However it must be said that a lead from 10 third – spade − generally speaking isn’t advisable; Roger Trezel classified it in the “deadly sins” category, between “venial sins” and “atrocities”.

The other table’s North, in the same match, opened by ♠2; there the Declarer, taken the spade return, went to dummy to finesse the ♦K, failing it, and this time North didn’t forgive him and shifted to hearts.

The third North opened by ♠10, an interesting choice; it clears better the suit situation to the partner – and to Declarer as well – and has a chance to retain the lead. Besides, it avoids the risk to block the suit. South took by ace and returned spades; the Declarer still played spades, finding the 3-3 break and the ninth trick.

The fourth North opened ♠2. Here played the Danish Morten Bilde with his young son Dennis. Morten was Declarer, and he inserted the Andersen’s fable inside the playing plan. First he noted that the if the diamond finesse succeeded, it wasn’t necessary do it, because the ♥K remained protected anyway. Then he realised that, whatever he had to do, it had to be done urgently, before some child would have started to cry “The King is naked!”. Thus, taken the spade lead, played ♦J from hand at once! North, without clues, had nothing to do but duck conceding the ninth trick and the contract.