Yesterday we published the views of Jean-Charles Allavena, the President of the Monaco Bridge Federation on the Auken Appeal in St. Louis. The outcome of that appeal resulted in the sensational elimination of the powerful Monaco-Zimmermann team in the Round of 16 of the St. Louis Vanderbilt Trophy. Jan van Cleeff, publisher of NewInBridge,  asked Sabine Auken, who’s team eventually won the event, to share her views with us and we recieved them! In fact you will find Sabine’s answers in Jean-Charles’ wording.

Jean-Charles: Concerning the Vanderbilt appeal, I believe that it raises many problems: Why is it possible to appeal at the end of a match about a board played many hours before? Is it normal to start the last 16 boards without knowing if a result has been changed, possibly moving 12 IMPs from one team to another one?

Sabine: We did not appeal at the end of the match, but instead right before the start of the second half. Admittedly that felt a bit stupid as the score then stood 93-11 in our opponents’ favor. The director seemed to feel the same, he almost laughed.  It is my understanding that it is ACBL practice only to hear appeals that change the outcome of a match. I agree that is not optimal and preferably a team should know where it stands before playing the last quarter. However, ACBL AC’s are not professional and made up totally of volunteers donating their time. I can see how it would not be fair to expect them to spend a lot of their scarce and precious time on cases that don’t matter.

Jean-Charles: Is it normal, when the NABC Championships are year after year more international, that the ACBL doesn’t apply the WBF rules, which entitle an Appeal Committee to split a decision? Here the only possibilities contemplated by the Appeal Committee seemed to be just made or one down, but the option to assign a score based on contract sometimes made and sometimes down has not been taken into account at all. 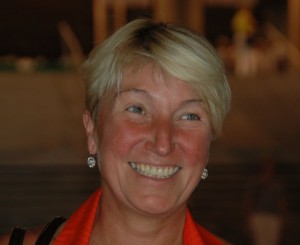 Sabine: ACBL rules do not permit split scores, so the AC did not have that option at hand. In my opinion it is futile to ask what is normal. We were not playing a world championship, but an ACBL tournament under ACBL rules. There are several ACBL rules I personally dislike or disagree with. But I have only two choices. I can either refrain from playing in ACBL events or I can play in ACBL events and adhere to their rules. I cannot expect to play and get the rules changed, only because I dislike or disagree with them.

Jean-Charles: The decision itself is very much against the Monaco Team, because despite the possible damage caused by misinformation, Auken-Welland had some opportunities to find the solution (and some arguments, such as “I may have lead a heart”, are simply a joke!) and clearly the cards played by Sabine and Roy were not the best ones to defeat the contract. I’ve been happy to see, for example on Facebook after a post of Roland Wald, that nearly all the players regarded the decision as a scandal…

Sabine: Nobody ever claimed we were prevented from beating the contract. That is not the point at all. The point is that my partner with the (mis)information given did not consider a defence he otherwise might (note that “might” is enough according to the laws) have considered. We are not required to think, what if the information I was given was not correct, how would I defend then?

I do not know who “nearly all the players” on Roland Wald’s Facebook site are that considered the decision a scandal, nor do I know what their qualifications are. I do know that both Michael Rosenberg and Kit Woolsey expressed strong disapproval of the comments criticizing the AC decision and thought overall the committee had done a good job and I consider both of them authorities in the field.

Jean- Charles: And the last point is that all this confirms that we should move very fast in order to cancel the Appeal Committees : when there is a group of very good TDs, who discuss the case and take a decision after a long discussion, how is it possible to have an Appeal Committee with lower level TDs and lower level players?? Really a joke in this case (who knows the members of the Appeal Committee?), but it often happens…

Sabine: As Jean Charles undoubtedly knows there will not be an appeals committee at the European Championships in Ostend later this year. I have lately become very impressed with the standard of TD decisions at the European level. All the directors are very skilled and knowledgeable and they take every case seriously, discussing it thoroughly with one another for a long time and polling true top players on all the relevant questions. So I welcome that change to no appeals committee.

Sadly I cannot say the same thing about TD decisions in ACBL territory. That is not to say there aren’t any good ACBL directors, there actually are many. But the overall standard is simply not nearly as high as at EBL tournaments. Personally I do not feel ACBL is ripe for the no appeals committee era.