Defence is arguably the most difficult part of the game, but when both defenders are on the same wavelength and have a complete picture of declarer’s hand, it can be very pretty. The diagrammed deal is from the Round of 32 match in the Vanderbilt Knockout Teams between Jimmy Cayne and Barry Rigal. Our heroes are the Italian stars Giorgio Duboin and Antonio Sementa, who made defence look so easy, when it in fact often is very complicated. Enjoy what could appropriately be called poetry in motion. 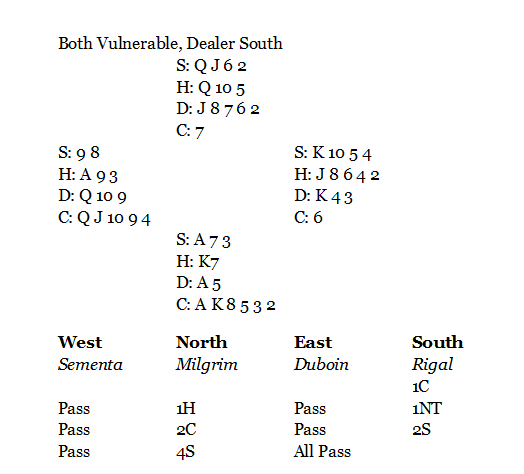 The auction needs explanations. 1C was natural, 2+ cards, 1H showed spades (Transfer Walsh) and 1NT was 18-19 balanced with two or three spades. Glenn Milgrim bid 2C as a puppet to 2D, intending to pass that. However, Barry Rigal felt he was a little too good to do as advised and broke the transfer to show a maximum with three spades. Milgrim was rather optimistic when he jumped to game in the Moysian fit.

No game has a chance on the actual layout, but I don’t think many would imagine that four spades could go four(!) down, although declarer did not do anything silly. He could indeed have escaped for less than 400, but when he tried a slightly dangerous route to achieve that, the defenders were there as hawks and took full advantage.

Antonio Sementa kicked off with the queen of clubs, won by the ace in hand, and a low spade was played to dummy’s queen. The first good move by Giorgio Duboin was to hold up his king in order to retain control of the trump suit. Next came a heart to the king and ace, and Sementa exited with the jack of clubs. This was ruffed with the six in the dummy, and the next excellent move by Duboin was not to overruff. After some thought, he let go a heart.

Rigal took a chance when he next played a diamond to hand and finessed in hearts, hoping to get rid of his losing diamond on the queen of hearts. The finesse lost, and the roof fell in. This was the position with seven cards remaining: 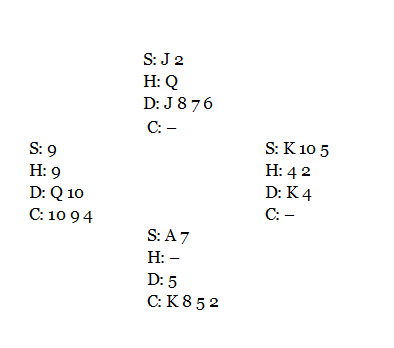 Duboin and Sementa had full count. Declarer was marked with SA, HK, DA and CAK, so Duboin knew that there was no room for the queen of diamonds. Consequently, he led a low diamond to Sementa’s queen, and the nine of spades came back, won with the ace. Rigal tried to ruff a club with the SJ but was overruffed. Duboin cashed the trump ten and set up another two tricks for himself with a heart to dummy’s queen. The six tricks declarer got were with ace of clubs, queen of spades, six of spades, ace of diamonds, ace of spades and queen of hearts. Not a lot on the combined values.

At the other table the contract was 3NT, down 2. Nevertheless, the Italians’ inspired defence in our room gave Cayne 5 IMPs on the way to a pretty comprehensive win.

Contributed by Roland Wald for NewInBridge.com