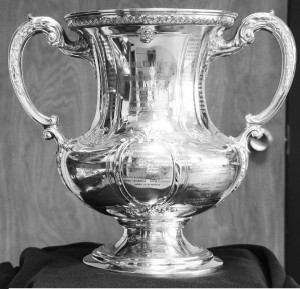 The Vanderbilt Trophy was born by a donation of Harold Stirling Vanderbilt (1884-1970); it was played in New York until 1958, then became the main team event of the spring National American Bridge Championship (NABC). Vanderbilt – the man – was the reformer who established in 1925 the new scoring for Contract Bridge; the old format punished too sternly the failing of the contract and rewarded too little the game and the slam, so discouraging the tries and the competition over level three. The new format was definitively accepted by the ruling bodies, mainly the New York Whist Club, in late 1927, and the first Vanderbilt Cup Championship, played in the fall 1928, was the first great event of the new age.

The 2013 spring NABC is running in the St. Louis Renaissance Hotel & America’s Center, in Washington Avenue, next to the River Mississippi. In Saint Louis was born in 1926 Chuck Berry, the rock singer whose famous song, Johnny B. Goode, entered the Voyager I that left the Earth toward the stars to explain the extraterrestrial what humans were able to do.

Saint Louis was generous to bridge players not only because Chuck Berry; here also was born Bryant McCampbell, who in 1915 invented the Takeout Double, published in Auction Tactics (1916 Dood Mead, NY). McCampbell also gave another powerful weapon to today players: the 4-3-2-1 point count, erroneously called MW because the more famous Milton Cooper Work republished it in 1927.

The NABCs, organized by the American Contract Bridge League (ACBL), are held three times a year; in spring, summer and fall. Each has one great knock-out team tourney – respectively Vanderbilt, starting tomorrow, Spingold and Reisinger – which release tickets to the seeding places in the Trials to Bermuda Bowl. The presence of foreign players in the team diminishes the value of these tickets, but a victory in NABC is a so great goal that many sponsors, as Jimmy Cayne or George Jacobs, don’t care of Trials and call all the strongest champion they can from everywhere. The European teams hurry to America to seek glory as well, as Pierre Zimmermann, who won in 2010.

A popular said advises to know the past if you’re trying to foretell the future. In the past of the Vanderbilt there’s a great player who, after fifty amazing years, is still here thirsty of victories. Bob Hamman is playing, tomorrow, and played in 1964. He won that Vanderbilt with Eddie Kantar, then his partner, and Lew Mathe, Howard Shenken, Peter Leventritt, Donald Krauss. All but Krauss are in the ACBL Hall of Fame. After that victory, in the same year, Hamman and Krauss qualified to enter the USA Team to New York Olympiads, losing the final against the Blue Team. Five years later he entered in Ira Corn’s Dallas Aces with Mike Lawrence, but soon paired up with Bobby Wolff, making the greatest American pair of all time.

It’s worthwhile to know that at beginning Hamman and Wolff were very far in bidding style; the former wanted to open four card major, whereas the latter was an adept of the fifth major; they found the meeting point in another feat of H.S. Vanderbilt: the Strong Club.

It’s difficult to say if Hamman-Wolff were stronger than Forquet-Garozzo or Belladonna-Garozzo, but Hamman is unique in the story of bridge for his power to make great pairs with many, many different players; and this champion is coming tomorrow with still another new partner.