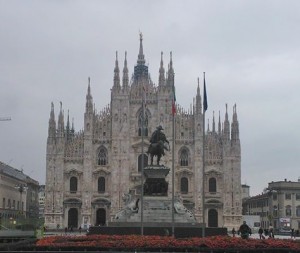 International Teams Tournament Città di Milano – NH Centro Congressi Milanofiori, Assago (Milano, Italy), 13/15 December, 2013. The Città di Milano is one of the most important team tourneys in Europe; established in 1970, it usually drew upwards of hundred teams, even from America. There are now a little less teams as the economic crisis wants its bite from bridge as well, but still the field remains very strong: there are not chances to win without continental or world champions in the team.

The tourney was ever played in the St. Ambrose day’s week, December 7th; St. Ambrose was archbishop of Milano in the fourth century AD and is patron of the city. This year, instead, the event has been displaced to the following week, 13-15th. Maybe the displacement needed in order to make place for Italian Individual Championship, but it looks unlikely, as we Italian already had proportions of Italian Championships, and the Città di Milano is more important; thus the true reason might be another one. Maybe – we are guessing – maybe it has to do with the Scala Problem.

The Scala Theatre opens the season precisely at St. Ambrose Day; when it fell on Monday-Thursday the players of bridge, and the singers, could play or attend both the events; when on Friday-Sunday there was conflict. So far the argument just raised some grumbling, but the 2013 is a special year for Milano and the Scala: it is the Giuseppe Verdi’s second century anniversary of the birth, and the overlap has become not longer admissible.

Unlikely? But rumour has that the Federation’s President and vice President were lovers of melodrama; they have been heard singing in duet at the sight of 2014’s budget (the aria was “A shudder assails you”, from Verdi’s “Lombard at First Crusade”)

But somebody might ask: why should this anniversary be so important for Milano? For example, Wagner was born in 1813 as well, and Verdi was not Milanese.

Well, it is true that Verdi was born in Busseto, next to Parma, not in Milano; he only got there on 1832. But he entered deeply the hearth of the town on 1842, at Nabucco’s premiere. This opera is the story of Jerusalem besieged by Nebuchadnezzar, king of Babylonia; it resembled the story of Milano in those years, under Austrian domination. When it raised the choir “Va pensiero sull’ali dorate”, all the theatre stood up and shouted “Viva L’Italia!”, launching three colour cockades and flags to the scene. And in 1848’s uproars, which we Italians now call The Five Days of Milano (March 18-22nd), and were prelude to the First Independence War, the people wrote Viva Verdi on house walls, where “VERDI” intended to be acronym of Vittorio Emanuele Re D’Italia: the wish of Italian Peninsula being united under the rule of the then king of Piedmont.

Therefore Verdi was Milanese and Milano loved his son. Verdi died on January 21st 1901. When the news that he was dying spread throughout the town, thousands of people came to pray silently under the windows of his suit in Via Manzoni. They put straw over the street such as wheels of carts wouldn’t make noise and wouldn’t disturb the Master.