After the seventh and the eight game, both drew, both Ruy Lopez (1. e4-e5; 2. Nf3-Nc6; 3. Bb5), Carlsen is leading 5-3 with four games still to play. The last two games differed since the white’s fourth move; after 3… Nf6, Carlsen played 4. 0-0 in the seventh game, whereas Anand played 4. d3 in the eight. The former lasted thirty-two moves; the latter lasted one more, thirty-three, but Carlsen’s 24. Qe5 (diagram from ChessBomb), forced the general change of pieces (after 24… Ng7, which was actually played by Anand, non 25.Nf6+?? because  25… Qxf6!!), leading to an almost symmetric pawn final, with the unavoidable draw the Norwegian player was looking for. 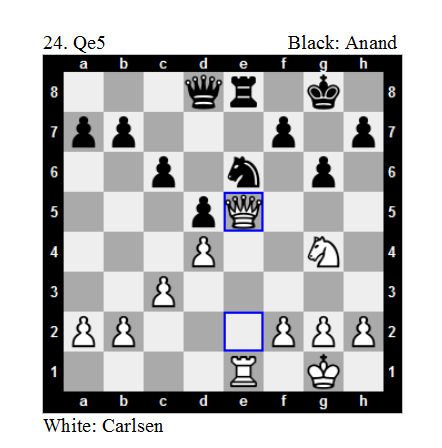 In the following four games Anand will need of two wins and will have the white twice, exactly as many as he needs, starting from the first game after the rest, on Thursday. It is possible that the Indian champion would have planned something of very aggressive with black, but the logic says that if you can play still only twice with white, and you needs to win twice, the best moment to attack is at once. On Thursday there will be a game which would be insane to miss.