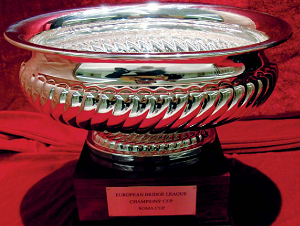 The 12th European Champions’ Cup was held at the Milenij Hotelin in Opatija, Croatia, 14-17th November 2013. The team invited to participate were the top ten contenders of the European Team Championship 2012, held in Dublin, plus the defending Champion “GS Allegra” Italy, and the Host Team: Bulgaria, Croatia, England, Germany, Israel, Italy (2), Monaco, Netherlands, Poland, Russia, Sweden.  The format was a round-robin qualifier, followed by semifinals and a final and playoffs.

During his Closing Speech, EBL President Yves Aubry annouced the next edition of the event will be held in Milan (Italy) starting on 13th of November, 2014.