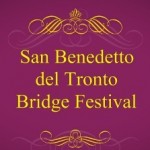 San Benedetto del Tronto Bridge Festival 4-9 June, 2012. National Team and Pair and Tourneys: 9-10 June. San Benedetto del Tronto, along the coast of the central Adriatic Sea, is the most important fish harbour of Italy and one of the finest – and cheap – touristic sea towns. Blue Flag since 1999, that is a grant of untainted sea, the best time to get there is right June, with the cheapest fees and less crowded sands. The town is also called Riviera delle Palme (Palm Coast) for the rows of palm trees which grow close to pines in a beautiful climate environment.

The Festival lasts from 4 to 11 June; the team tourney will be played on 9th in the afternoon and evening; the pair tourney will take place the day after. The arbiters are Massimo Ortensi and Nelda Stellin; the venue is the Hotel International www.internationalhotel.it

Other hotel and tourist information can be seen here:

Wake up at 4.00 in the morning and go to the harbour, in the northern side of the town: the boats come back and sell the fish of the night in the Fish Auction.

From the harbour, it is possible to walk for seven kilometres always on sand, until the River Tronto’s mouth.

Brodetto of San Benedetto (the brodetto is a special fish soup): in this local recipe it is strongly advised to use red and yellow peppers (not green), and green tomatoes (not red). The Sambenedettesi (so are called the inhabitants) say that their brodetto is the best of Italy, then of the World. But the Viareggini (inhabitants of Viareggio, in Toscana), instead say that their one is the best. Who’s right? Both. In the late ‘800 and early‘900 many fishers of San Benedetto emigrated to Viareggio.