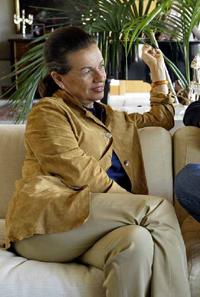 When legendary Non-Playing Captains are discussed, only two names will be mentioned, both Italian: Carl’Alberto Perroux of the Blue Team and Maria Teresa Lavazza of the eponymous Lavazza Team. Maria Teresa retired this year after the European Team Championships in Dublin — as a captain or coach, she won all the major team titles: three Olympiads, two Bermuda Bowls and a Rosenblum; a World Transnational Teams and five European Open Teams titles also adorn the trophy case.  Seven other world and European medals complete the npc résumé. As a player, Maria Teresa Lavazza has had some success as well: wins in the European Mixed Teams and the European Champions Cup (twice), as well as three other medals in European Mixed Team Championships.

Lavazza’s retirement came about as a result of the Italian Bridge Federation’s avowed aim to eliminate selectors and use team trials to choose their teams. This opens the door for sponsors to play in the team, not a possibility when three pairs were selected by the Commissario Tecnico. There is no question that the open Italian bridge team will be worse off without Maria Teresa Lavazza at the helm and that the rest of the bridge world will miss her dearly.

The Lavazza coffee stations had become an almost-permanent part of World and European Championships and were greatly appreciated by the attendees – Lavazza coffee has woken up a generation of bridge players, thus improving the standard of the game and providing journalists with untold numbers of brilliancies.

Apart from bridge, Maria Teresa will now have more time to spend with ADISCO, the children’s leukemia charity of which she is Regional President, and with her five grandchildren.