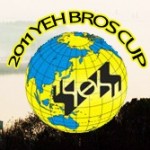 2011 Yeh Bros Cup Invitational Bridge Championships. Around 50 of the world’s best players in a 28 team tournament, one of the biggest money events, The Yeh Bros Cup Invitational Bridge Championships will take place at the charming town of Wuxi Jiangsu, China, from Monday 18th to Friday 22nd of the month. The event, which is generously sponsored by the eponymous Mr Chen Yeh, has a total prize pool of about $190,000, with the winning team taking approximately $100,000.

Initially the event was an annual affair, since 2009 it is now every two years.

It’s an invitational torunament: in this years event two teams from Italy have been invited, Lavazza and Zaleski.

For Italy this event has been a happy hunting ground, winning in 2004 and

To close the event on 21 and 22 April an invitational pairs tournament will be played: The award for first prize is $ 20,000.

Let’s have a look at some of the other participating teams: In the list we can find, more or less, the national representatives of Bulgaria, Poland, Israel, Holland, England, Iceland, Sweden, Australia, Japan, India, Indonesia, Taipei and Hong Kong. In addition, the team Hampson (Hampson-Gitelman and Joe Grue with Curtis Cheek, brilliant in the last National American) and the team of Morris Chang (in which militate Peter Weichsel and Mark Lair) to represent the USA. Last but not least some very strong Chinese teams.

These are the italian teams:

Full event will be broadcast on BBO vugraph.