10th European Champions’ Cup – Bad Honnef, Germany 17th – 20th November 2011.  The final of the 10th European Bridge Champions’Cup was held between two of the world’s strongest teams. BC ‘t Onstein 1 had a great season. First of all the club is Cup holder (Izmir 2010), and then it won respectively the Dutch national championship, the prestigious Zhejiang China Gate Cup and last but not least the Bermuda Bowl in Veldhoven.  All members of Allegra Lavazza have multiple world, European and Olympic championships to their names. Consequently the encounter between both teams certainlywas something to look forward to.

Board 4 produced some excitement: 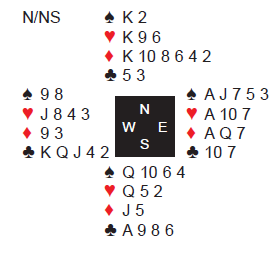 The board was played at 11.27 AM, way to early for Giorgio Duboin. His seat was taken by Guido Ferraro, the ‘fifth’man of team Lavazza and an early riser.

After South led the ♦J there was no way for declarer to make his contract. In fact going down one was not a bad result (-50).

At the other table the world looked completely different:

1♠ is limited to 15 HCP which explains De Wijs’initial pass. Later West doubled 2♦ when passed around to him. East’s decision to sit was a little off-beat but understandable. Muller kicked off with the ♣10. West won the Jack when declarer ducked and returned the suit. When Bocchi played trumps East was endplayed during the rest of the hand. He made his three Aces and the Trump Queen but that was all: NS +180 and 4 IMPs to Allegra Lavazza. First blood to the Italians.

It looks as if a heart switch to 6, 7 and Queen might beat the contract, but again East is endplayed all the time and the ♠J finesse does the job for declarer. The rest of the first segment things went much better for the Dutchies. Then came board 14 (segment II): 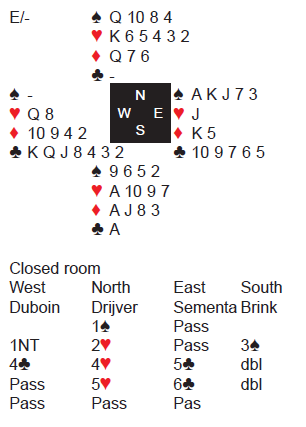 Onstein did a pretty good job to push its opponents all the way to 6♣, where 5♥ is down. The contract could have gone three light but after the lead of a low heart by North NS collected +300. 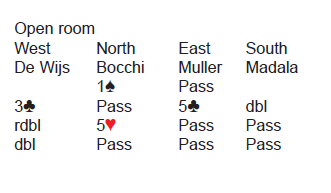 Simon de Wijs was ready for some action. His 3♣ was natural and invitational and his redouble was a psychological move. North Bocchi accepted the bluff and ran away to 5♥, duly doubled by De Wijs.Bauke Muller led a top spade and West pitched ♦10 (?). When East continued with a low spade, ruffed by De Wijs and all of a sudden the contract was cold. West returned a club and Bochi pitched a spade, drew trumps, played a diamond to the Jack, cashed the ♦A and pitched his last spade on the 4th diamond. NS +650 and 8 IMPs to Allegra Lavazza.